Stumbled upon a nice flow-chart detailing the consequences of PvP actions in the different Security areas of New Eden. I was aware of most of the mechanics but sure do like the layout and how it details the remote rep stuff, click on the picture to get the large version. 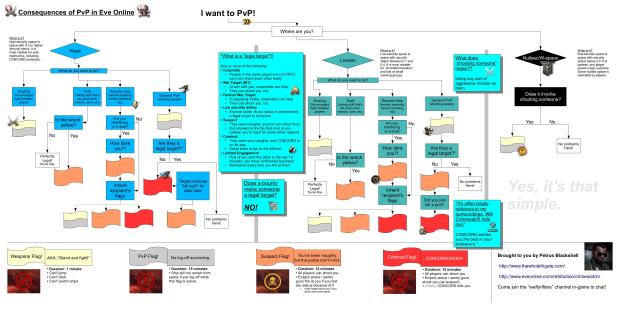 It all started ‘innocently’ enough… I had a couple hours to kill so thought I’d try to find a MTU or two to blow up. I hit my normal systems around Lanngisi and found a couple but the owners were in system so they were off limits.

There is another area of Level 4 mission activity near Altrinur so I headed down that way and took a look. Got into Altrinur and saw a few on D-scan right away so started my scans and after pinpointing two of them went and took a look. The first was behind an acceleration gate and I could see a Raven on scan in the pocket – left that one alone but the other was a bit more intriuging.

The MTU was in a mission asteroid belt, there was one Mercenary Frigate, a neutral NPC Freighter and two Enormous Freight Containers on grid. I checked out the MTU and cans, a fella named angry abed owned them all and he was not in system. I uncloaked and started shooting the Frigate and while I was doing that the Mercenary blew up the Freighter. Once the grid was clear I took a look in each of the Enormous Containers and discovered that they were both pretty much full of ore, almost 500,000 m3, which came to a value of around 70 to 80 million ISK.

I don’t have any ships that would haul that much stuff in one go and I didn’t have the time to attempt to get it all with a smaller hauler, that would have likely taken 30 or more trips, but a couple of Corp mates suggested that I bring my own Enormous Containers and swap the ore into them and that is exactly what I did, after blowing up Mr.abed’s MTU.

I had a RL function to get to but I had just enough time to go grab a couple of containers, set them up next to angry abed’s containers and then move all his ore into my containers. I then moved off the cans, cloaked up and got a couple of Mates to Fleet me so they could come camp the cans in anticipation of angry abed coming back to get his ore and possibly catch him stealing it back from my cans.

The Mates let me know that angry did come back and it looked like he was puttering about the cans maybe thinking about taking my ill-gotten gains but an ill timed PC crash that de-cloaked one of the campers and the fact that I was still in System scared him off. When I got back home the boys helped me out with a Freighter and we emptied the containers and called it a night.

Was out wandering Low-Sec the other night when I get a notification that a RL mate has logged in, his EVE in game name is Melrick Aubaris. He’s not got that much time to play and is in Hek so I start making my way that direction thinking we may be able to find some trouble to get in to and when I’m about two jumps out Melrick notices that a newer fella, Andrey Dubina, has just gotten a Suspect Flag which gave us 15 minutes to hunt him down and attack without any CONCORD penalty.

As soon as I hit Hek I reshipped into Naglfar – RAGE™ and started hitting the belts, went with the assumption that Andrey was probably looting wrecks, and it paid off – I found him, flying a Talwar, in Hek IX – Asteroid Belt 4.  Unfortunately I had warped in at Ø and got decloaked by an asteroid so he warped off right away but he had been about 200km off the belt so curious I took a look at what was out there and lo and behold there was a can so I warped out to it and took a quick peak inside, it was full of loot. Now this brightens things up, I cloaked up and reposition about 15km above the can and wait. While I’m waiting Melrick has fitted a long point on his Vexor, undocked and gotten himself to a Safe Spot in anticipation of Andrey coming back to get his loot.

We didn’t wait too long… Mr.Dubina warped right back to his can and started orbiting it so I started my approach and once within 5km had Melrick warp to me at Ø. When Melrick came in he decloaked me, got point and unleashed his drones while I hit Andrey’s Talwar with my ECM and started firing missiles at it. The ambush must have shook up the poor fella and/or the ECM worked well because he didn’t even Yellow Box either of us? Andrey’s Talwar went down fast and then we popped his Pod for good measure.

He apparently was not too pleased with us and shortly after our ambush placed bounties on both Melrick and me – we’re now ‘Wanted’ – it was a quick bit of fun to end the night!

Life and Times of a Noob CEO
Piranha Swarm

A hunger for the flesh of internet spaceships.

A journey through the mind

Musings about the virtual and the real world

Taking wing - An EVE Online Blog, with other things sprinkled on top.

Its knack lies in learning to throw yourself at the ground and miss. - D. Adams