Found a C-3 in Skarkon this afternoon so jumped in with “Veiðimaðr” and took a look around. Found a couple of C-3 connections and one Relic Site. Thought this would be a good opportunity to try setting up a perch, camp the site out for a bit and see if any one came on by.

I had a good spot… Had two visitors to the system during my hunt and one of them scanned down and came to the Relic Site in an Imicus. I was patient and waited until he had locked up the can and started his hack then uncloaked, targeted, hit him with the Warp Distruptor, Target Painter and let loose the torpedoes. I got the jump on him and hit him with two decent salvos before he really started taking off on me and the third salvo hit him good due to his Microwarpdrive. I got him into about 50% structure for sure but then he got range on me dropped the Distruptor and I lost him.

Lessons have been learned. Next time I’m camping a Relic or Data site I can expect Frigates – get closer, prepare ahead of time and use a Warp Scrambler!

I started the session out in “Veiðimaðr”, scanned down and jumped into a Class 3 Wormhole. Spent some time cloaked up wandering around seeing if there was any activity, no joy, then scanned down and identified all the Cosmic Signatures in the System. Marked a few other Wormholes and found one Central Serpentis Survey Site. I decided to camp out for a bit so made a perch about 45km off all the hackable cans and waited… and waited… and waited…

I was in the C3 for just over an hour, I passed the time by browsing with the IGB and would hit D-Scan every so often to see if there were any Probes in system. Eventually I got bored so tore back home, re-shipped into my Cheetah then went back in and hacked the site. Will have to try that hunting tactic another time.

After that uneventful hunt I thought I’d try my first go with the 20 frigate plan so activated “Banahǫgg Spá I” and went for a long roam through some Low-Sec Systems – again no joy.

I was passing through Hek on the way back to my Low-Sec staging home so thought I’d see if the icebelt in Nakugard was getting any activity so re-shipped again into “Naglfar – RAGE™” and headed that way. There were a few miners there, none in any really soft targets but there were a couple of Retrievers working the ice. I set up a little bit below them so I was within range of my launchers and started the waiting game again. D-Scan was showing a Thrasher and a Catalyst in system so I didn’t think it would be too long before someone got the Ganking itch and I was correct. It was maybe a ten minute wait before Mr.Kryz Keedra arrived at the icebelt in his Catalyst and started approaching Josie Peppers’ Retriever. After he fired and got his Criminal flag I de-cloaked, locked him up, hit him with both ‘Hypnos’ Ion Field ECM I’s to disrupt his targeting and then assigned all my weapons – his Cat went down quickly and there was no miner losses. He logged quickly after this engagement, I don’t think he was expecting anything like that!

Had a few good exploration finds over the weekend…

Scanned down and jumped into a Class 2 Wormhole from the home system. I always get a little rush jumping into the unknown of W-Space, you just never know what you’re going to find and this one was untouched. When I’m hunting/exploring in W-Space I make it a point to at least identify all the Cosmic Signatures in the System I’m working and this C-2 had a ton! There had to have been at least twenty Signatures to scan down and I can’t remember what they all were but I did pinpoint ten hackable exploration sites, six Relic and four Data.

I had jumped in flying the Hunting Hound hoping I might find something to shoot but no joy – it was a small System and all I could see on the D-Scan were some Control Towers, there was not one ship in system. The first thing I do anytime I jump into a Wormhole is bookmark my exit and after scanning down all the Sigs and bookmarking all the hackable sites I warped back to it, jumped out, re-shipped into my Cheetah and headed back in.

I managed to hack all but two of the cans (two Data site cans) and ended up with a little over $175 million ISK in the hold and found a  3-run Dark Blood Large Beam Laser Battery BPC – not one of the epic BPC’s but it’s the first Faction BPC I’ve found and it got me pretty excited!

I also stumbled upon my first few Drone Data Sites and scored a number of ‘Augmented’ & ‘Integrated’ Drone BPC’s.

Von Keigai Wspace hunts in a Manticore with a couple of different fits – Kalam is primarily a Minmatar pilot so I’ll be giving this a go in a Hound, my lower skill fit is below: 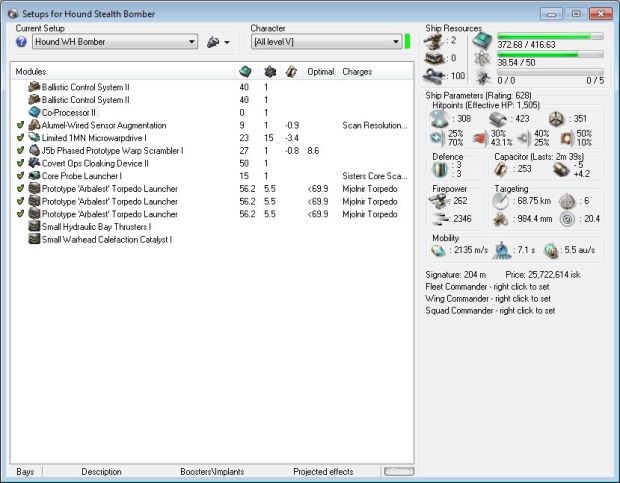 Just like Von Keigai my tactic will be to carry a mobile depot and have the following in cargo to re-fit to if I find some mining Ventures:
– an extra J5b Phased Prototype Warp Scrambler I
– and 3 X Light Missile Launchers, Caldari Navy Mjolnir Light Missile

Life and Times of a Noob CEO
Piranha Swarm

A hunger for the flesh of internet spaceships.

A journey through the mind

Musings about the virtual and the real world

Taking wing - An EVE Online Blog, with other things sprinkled on top.

Its knack lies in learning to throw yourself at the ground and miss. - D. Adams